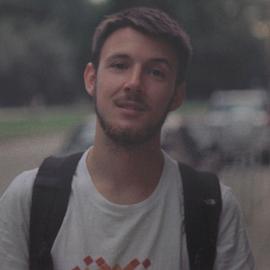 In the course of my graduate studies at Rice’s Department of Anthropology, I will be developing a research project exploring water insecurity in urban areas. I aim at exploring the intersection of resource scarcity, climate change, urban planning, and political ecology among others. My coming to Rice is supported by the Bulgarian-American Fulbright Commission.

As an undergrad I majored in Anthropology at New Bulgarian University with a final thesis focused on the everyday politics of a group of political activists after their disenchantment with a former social center they had founded. I also did a minor in TV and Film and worked on documentaries and creative projects of AGITPROP, an independent Bulgarian production company. I was also tech assistant and assistant co-ordinator at the Balkan Documentary Center’s Discoveries Workshop. Between 2016-2018 I was the web co-ordinator of the International Association for Southeast European Anthropology and was assisting the organization of the Association’s biennial conference in 2016.

Before deciding to come back to academia I spent a couple of years in the documentary film industry. My credits include researcher, assistant producer and production assistant for various TV and feature-length documentaries. I was also fact checker and writer for the last two seasons of the first Bulgarian TV series, produced for National Geographic.