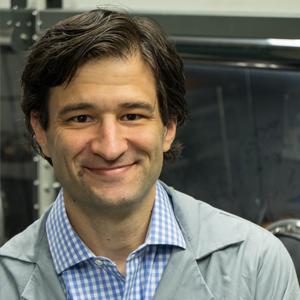 Professor of Chemistry
Faculty Director, Institute of Biosciences and Bioengineering

Zachary’s research interests center around the intersection of protein chemistry and transition-metal catalysis. Drawing from organic, biological, and inorganic chemistry concepts, the lab has developed a number of conceptually novel methods for specific protein modification with transition-metal catalysts and/or reagents. The lab is especially interested in fundamental concepts for performing selective chemical reactions in complex, polyfunctional environments. In the context of proteins as substrates for chemical reactions, this means moving away from residue-selective chemistries, to develop reactivity paradigms driven by secondary structure, local conformation, and/or unique local sequence. In the course of these efforts, the lab has made contributions in medicinal chemistry, bioimaging and protein analysis, and synthetic methodology development.

Zachary T. Ball grew up in Columbus, OH. He graduated from Harvard University in 1999, earning an A.B. in Chemistry and working on problems of solid-phase synthesis of small-molecule libraries in Gregory L. Verdine’s laboratory. Zachary earned his Ph.D. in Chemistry from Stanford University in 2004, studying under the guidance of Barry M. Trost. His graduate research focused on ruthenium catalysis and methods for preparation and exploitation of organosilanes in synthesis. Zachary initiated a total synthesis of Soraphen A, made possible by methodological advances he developed.

During the years 2004–2006, Zachary was a Miller Fellow at the Miller Institute for Basic Research in Science at the University of California–Berkeley, working with Jean M. J. Fréchet in the Department of Chemistry. While at Berkeley, he applied synthetic organic chemistry to complex challenges in photo- and electro-active polymers, probing the ways in which molecular structure, polymer polydispersity, and phase behavior affect device performance.

Zachary moved to Houston in 2006 to begin his independent career on the faculty at Rice University. His research program has focused on reactivity questions at the interface of organic, biological, and inorganic chemistry. He is particularly interested in protein chemistry and the design of catalytic reactions for selective transformation of protein substrates. Chemistry in the group is focused on the search for non-traditional paradigms for reaction selectivity in complex, polyfunctional environments. These efforts have shed new light on protein–protein interactions and have provided new techniques for the preparation of antibody–drug conjugates. These investigations have also prompted studies to develop new metallo-therapeutic agents and new methodologies to understand the fate of metal complexes in living cells.

Zachary is currently Professor of Chemistry at Rice. In addition to his academic duties, Zachary is the Director of the Rice Institute of Biosciences and Bioengineering.