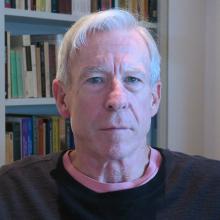 I came to Rice in 1983 after finishing a PhD at Yale, studying for a year in Germany, and teaching briefly at Fordham University. At Rice, I found an ideal place to pursue my rather eclectic set of interests. For years, I participated in a team-taught and interdisciplinary course devoted to thinking critically about some key moments in the history of Western art, literature, philosophy, and religion. What unified my interest in these various humanistic ares was their common concern with meaning: not the meaning of "life" (which is certainly part of the issue!), but rather what meaning is and how something can mean anything at all. This, as I came to argue in my first book (Husserl, Heidegger, and the Space of Meaning) is the fundamental question of philosophy and is most productively explored by means of the phenomenological method. Much of my subsequent research has been devoted to the cognitive, epistemic, metaphysical, ethical, and political implications of adopting a phenomenological approach. In my 2013, Normativity and Phenomenology in Husserl and Heidegger, I analyze the normative structure of meaningful experience, leading to my two current research projects: the relation between phenomenology and traditional conceptions of metaphysics, and a normativity-first account of what reasons are.