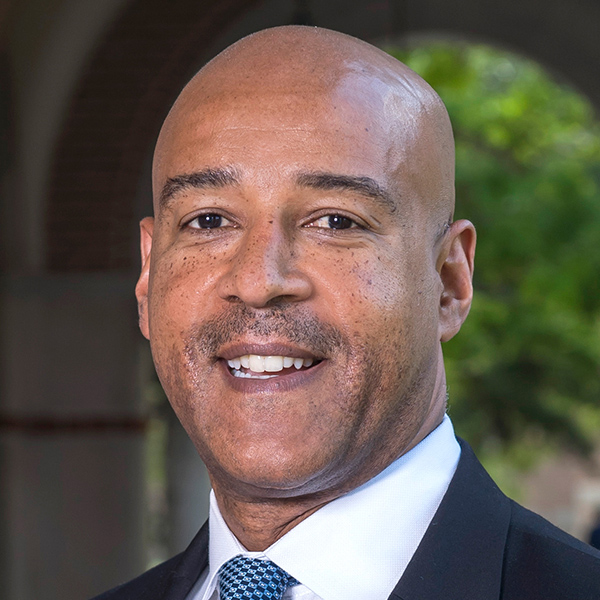 Office of the President

Reginald DesRoches is Rice University’s eighth president. He also serves as a professor of civil and environmental engineering, and professor of mechanical engineering. As president, DesRoches serves as the chief executive officer of the university and its 7,500 students, eight schools and more than 700 faculty. He previously served as Rice's Howard Hughes Provost and William and Stephanie Sick Dean of Engineering.

DesRoches’ top priorities are to enable Rice to reach a new level of distinction nationally and internationally for impactful research, award-winning scholarship and insightful creative work. He also wants to build graduate programs that are of the same distinction as Rice’s top rated undergraduate programs while maintaining Rice’s commitment to diversity, equity, and inclusion.

During his tenure as provost, DesRoches led the university’s academic, research, scholarly and creative activities through the challenges posed by the COVID-19 pandemic, including the sudden suspension of classroom instruction and Rice’s successful conversion to remote learning. In addition, he dramatically increased the university’s research awards, launched several new centers and institutes, and forged new partnerships and programs with institutions and organizations in the Houston area, including the Texas Medical Center.

Under his leadership, several new majors and professional master’s programs were launched, including a new undergraduate business major. Several new online programs were created during his time as provost as well, including the online degrees in the Jones Graduate School of Business and several online master’s degrees in the School of Engineering. During his time as provost, DesRoches made diversity, equity and inclusion a priority, establishing the Office of Diversity, Equity and Inclusion, which has been instrumental in dramatically increasing the diversity of Rice’s faculty and graduate student population. He also began leading the first major expansion of the undergraduate body in over a decade.

DesRoches' tenure at Rice began in 2017, when he accepted the post as the William and Stephanie Sick Dean of Engineering at the George R. Brown School of Engineering. As the leader of Rice’s engineering school, he was in charge of nine departments, 137 faculty and 2,500 students. During his time as dean, the school dramatically increased in size, stature and department rankings. It also saw a significant growth in research programs. Several key interdisciplinary initiatives were launched during DesRoches’ time as dean, some of which were neuroengineering, synthetic biology and data science. He also led the establishment of the a collaborative research center in India with IIT-Kanpur, the first of its kind.

Before his appointment at Rice, DesRoches served as chair of the School of Civil and Environmental Engineering at Georgia Tech in Atlanta. As chair, he led a major renovation of the school’s main research and teaching home, and he spearheaded a major fundraising effort for the school that doubled the number of endowed chairs and professors. During his tenure as chair, the school dramatically moved up in the U.S News & World Report graduate rankings, achieving a ranking of No. 2 in the nation — the highest in the history of the school.

DesRoches’ primary research interests are in the design of resilient infrastructure systems under extreme loads and the application of smart materials. His research is highly interdisciplinary and spans micro- to macro-scales. He has published approximately 300 articles and delivered more than 100 presentations in over 30 different countries. He also has mentored more than 30 doctoral students, many of whom hold faculty positions at top universities around the world.

A fellow of the American Society of Civil Engineers (ASCE) and the society's Structural Engineering Institute (SEI), DesRoches served as the key technical leader in the United States’ response to the 2010 Haiti earthquake, taking a team of 28 engineers, architects, city planners and social scientists to study the impact of the earthquake. He also has participated in numerous congressional briefings to underscore the critical role that university research must play in addressing the country’s failing infrastructure and enhancing the nation’s resilience to natural hazards.

DesRoches chaired the National Institute of Standards and Technology's (NIST) National Construction Safety Team Advisory Committee (NCST), which is overseeing NIST’s investigation of the collapse of the Champlain Towers South Condominium in Surfside, Florida. He is on the advisory board for the Natural Hazards Engineering Research Infrastructure (NHERI) Simulation Center, the California Department of Transportation Seismic Advisory Board, the Halliburton Labs Clean Tech Accelerator and the HTX Impact Fund, which is focused on minority led startups.

He previously served on the advisory committee for the Engineering Directorate for the National Science Foundation, the National Academies Resilient America Roundtable (RAR), the Global Earthquake Modeling Scientific Board and the National Science Foundation Engineering Advisory Council. In recent years, DesRoches has testified before U.S. House and Senate subcommittees on the science of earthquake resilience, and he has participated in Washington, D.C., roundtables for media and congressional staffers on topics ranging from disaster preparedness to challenges for African American men in STEM fields.

In 2014, DesRoches became Georgia Tech’s Faculty Athletics Representative, serving as the liaison between the university and its athletics department. He worked closely with the athletic director and university leadership — including the president, provost and senior vice provost for academic affairs — to formulate policies affecting intercollegiate athletics on campus. His responsibilities also included representing the institute to the Atlantic Coast Conference (ACC) and the National Collegiate Athletic Association. During the 2016-2017 school year, he was appointed to the ACC leadership team as vice president of the conference.

DesRoches is married to Paula DesRoches, a highly accomplished healthcare professional, nurse practitioner and administrator recognized for her leadership in occupational health. The couple has three children, Andrew, Jacob and Shelby, who is a student at Rice.

Design of resilient infrastructure systems under extreme loads and the application of smart and adaptive materials.

2020 Elected to National Academy of Engineering

2016 Fellow of the Structural Engineering Institute

2015 Fellow of the American Society of Civil Engineering