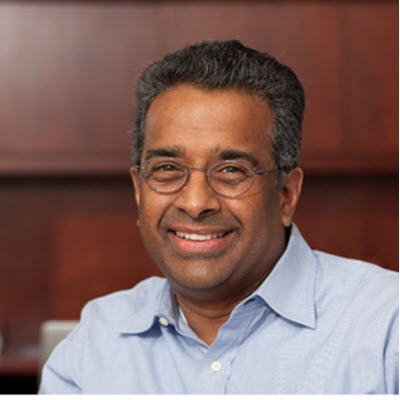 Ramamoorthy Ramesh is an internationally recognized leader in materials science and physics, with applications to energy. As vice president for research, Ramesh oversees Rice's internal and external research ventures. He partners with Rice’s senior leadership — together with deans, faculty and staff — to bolster the university’s research infrastructure and works to propel productivity and impact to new heights.

Prior to joining Rice, Ramesh held a number of leadership positions University of California at Berkeley, including the Purnendu Chatterjee Chair in Energy Technologies, director of the Berkeley Nanoscience and Nanoengineering Institute, founding director of the U.S. Department of Energy SunShot Initiative, deputy director of science and technology at Oak Ridge National Laboratory, and associate laboratory director at the Lawrence Berkeley National Laboratory.

On the SunShot Initiative, Ramesh worked under former energy secretary and Nobel laureate Steven Chu to lead a $300 million-a-year initiative aimed at bringing the cost of solar electricity down to grid parity, without the assistance of federal or state subsidies. He set the science and technology agenda, established the funding priorities and oversaw the solar research and development activities at the U.S. national laboratories. The program has been lauded for bringing solar electricity into large-scale deployment around the world.

In his role at Oak Ridge, Ramesh oversaw one of the nation’s largest research and development programs in materials and physical sciences, energy and engineering, computational sciences, biological and environmental science, neutron science and global security. The laboratory’s annual research portfolio at the time was about $1.5 billion.

Prior to returning to Berkeley in 2004, Ramesh was a member of the technical staff at Bell Communications Research, and served as an associate professor, professor and eventually distinguished University Professor in materials science and engineering at the University of Maryland.

Ramesh has more than 600 publications and 98,000-plus citations. He has given more than 300 invited/plenary/keynote talks and received many honors. He was named a Citation Laureate for his research on multiferroics in 2014 and was elected a member of the U.S. National Academy of Engineering in 2011. He was also named a Foreign Member of the Royal Society of London in 2020 and a Fellow of the American Academy of Arts and Sciences and the Indian National Science Academy in 2022. He is a fellow of the American Physical Society, the American Association for the Advancement of Science and the Materials Research Society.