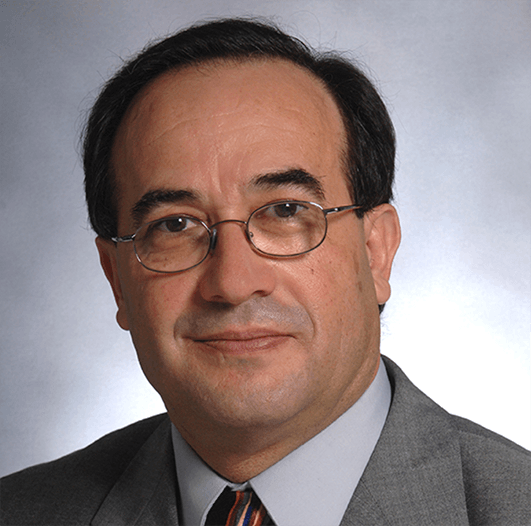 Professor Spanos is a  graduate of the Varvakeios High School for Advanced Students, and a five-year diplomate in Mechanical Engineering and Engineering Science from the National Technical University; in Athens, Greece. From the California Institute of Technology (CALTECH) he holds an M.S. in Civil Engineering; and a Ph.D. with a major in Applied Mechanics, and a minor-I in Applied Mathematics, and minor-II in Business Economics and Management.

Professor Spanos' research efforts focus on the dynamics and vibrations of structural and mechanical systems under a variety of loads. Systems exhibiting nonlinear behavior and/or exposed to hazard/risk inducing conditions receive particular attention. His group is also interested in mechanical properties and fatigue/fracture issues of modern (nanocomposites, etc.) materials, and in signal processing algorithms for dynamic effects in biomedical applications.

Professor Spanos received a National Science Foundation (NSF) Presidential Young, and Richards Investigator Award for research in engineering mechanics. He is also a Pi Tau Sigma, a Larson medalist from the American Society of Mechanical Engineers (ASME) for outstanding achievement in mechanical engineering within ten, twenty years and beyond from college graduation; a Huber Prize recipient for outstanding research from the American Society of Civil Engineers (ASCE); an A. M. Freudenthal Medalist from ASCE for lifetime contributions to probabilistic mechanics and reliability analysis; and a Newmark Medalist from ASCE for his contributions to the theory and applications of dynamics and vibrations. He has received the Research Award for Senior Scientists from the Humboldt Foundation in Germany for his contributions to engineering mechanics; and the Stochastic Dynamics Research Prize from the International Association for Structural Safety and Reliability (IASSAR). Twice he has received the G. R. Brown Award for Superior Teaching at Rice University. He has served as an ASME Distinguished Lecturer for the period 1997-2003 with worldwide lecturing engagements. He is the 2003 Theodore Von Karman medalist from ASCE for lifetime contributions to engineering mechanics, and the 2020 Caughey Medalist from ASME for outstanding Contributions to the field of Nonlinear Dynamics.

He has published more than 350 technical papers and has authored/edited more than 20 books and conference volumes. He serves on the editorial boards of many journals and he is the Editor-in-Chief of the International Journal of Non-Linear Mechanics (launched in 1965) and the Editor of the Journal of Probabilistic Engineering Mechanics (launched in 1985). He has supervised the theses of more than 75 M.S. students and the dissertations for more than 60 Ph.D. students. He has hosted innumerable Visiting Scholars/Students on sabbatical and other educational missions. His work has been funded by NSF, NASA, DOE, and by numerous other industrial projects and governmental programs.

He has offered, worldwide, many professional short courses. He has consulted extensively as a Technical Advisor. He has also served widely as an Expert Witness and as a Special Federal Court Master for intellectual property, product liability, and system performance/safety litigation. He is a Registered Professional Engineer in Texas; and a Licensed Engineer, both in Civil Engineering and in Mechanical Engineering, in Greece.

He is a Fellow of the American Academy of Mechanics (AAM); of the Engineering Mechanics Institute of ASCE, and of the Alexander von Humboldt Association of America. He is a member (by invitation) of the Earthquake Engineering Research Institute, the International Association for Structural Safety and Reliability, the American Society of Engineering Education, and the American Association for the Advancement of Science. He is a Distinguished Honorary Member of both ASCE and ASME. He is a foreign member of the National Academy of Greece (Academy of Athens); of Academia Europaea (Academy of Europe); of the European Academy of Sciences and Arts; of the Indian National Academy of Engineering; the Russian Academy of Engineering; and of the Chinese Academy of Science; He is a member (academe) of the National Academy of Engineering (USA); and of the American Academy of Arts and Sciences.  He has served, both, as the chair of the ASCE Engineering Mechanics Division and as the chair of the ASME Applied Mechanics Division. He has held Distinguished Visiting Professor and other positions in numerous prestigious institutions, worldwide, and he is the recipient of a 1995 Senior Researcher Award from the Von Humboldt Foundation (Germany); the 2014 Palermo (Italy) University Prize for international scientific collaboration; and a 2017 International Scientific and Technological Cooperation Award of the People's Republic of China. Further, he has served in leadership/mentorship positions for a plethora of diversity enhancing initiatives and organizations.