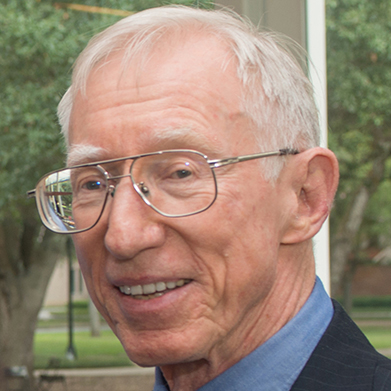 Electrons are the glue that binds molecules together, and the transfer of an electron is one of the first steps in making a chemical bond. Well-known example of these processes range from those occurring in automobile storage batteries to those occurring in the eye when light is detected. We wish to understand how the electron is transferred. Is the molecular negative ion stable or does it break up? Can we think of the electron being transferred to a localized site on the molecule? If so, does transfer to different sites result in different negative ions? We are able to gain some insight into these questions by studying electron transfer collisions in molecular beams. A beam of fast donor atoms collides with acceptor molecules which have been oriented in space and the electron transfer can be probed for collision at one end of a molecule, or at the other. The negative ions can be identified by mass spectrometry. A schematic diagram of the apparatus is shown in Fig 1. Molecules such as CH3Br have quantum states corresponding to "up" and "down" orientations and these can be separated in an inhomogeneous hexapole electric field. The molecules emerging from the focusing field are oriented along the direction of a uniform (weak) electric field and the molecular orientation can be changed by changing the direction of the weak field. The incoming atoms can then attack either the Br or CH3 end of the molecule.

Our recent results on electron transfer to the haloforms, CF3H, CCl3H and CBr3H, serve to illustrate what we can learn. Fig 2 shows the steric asymmetry factor, G, measured for the formation of the respective halide ion (F-, Cl-, or Br-) for each molecule. G is defined at the difference in signal for attacking the different ends divided by the sum of the signals, G=(S--S+)/(S-+S+). If reaction occurs at only the negative end, G will be +1, (-1 for the positive end) and if the ends are equally reactive G=0. As shown in Fig 2, G is nearly zero for bromoform and chloroform because they are almost spherical. But for fluoroform, high energy collisions strongly favor formation of F- for attack at the F-end of the molecule. The steric specificity rises as the energy is lowered, and suddenly reverses, showing that F- is formed preferentially on attack at the H end. At low energies the electron enters the LUMO and if the energy is close enough to threshold the nascent F- will combine with the nascent K+ donor to form KF, which is undetectable in these experiments. F- production will favor electron transfer on the far side of the molecule, near the H atom where the production of KF is negligible. Only fluoroform shows this behavior because the LUMO in CF3H is the σ*CH orbital and the electron can be transferred to this orbital when the K atom attacks the H end of the molecule, far from the nascent F-. The LUMOs for CCl3H and CBr3H are the σ*CX orbitals, not the σ*CH orbital and there is no possibility for electron transfer when the ions are far apart. 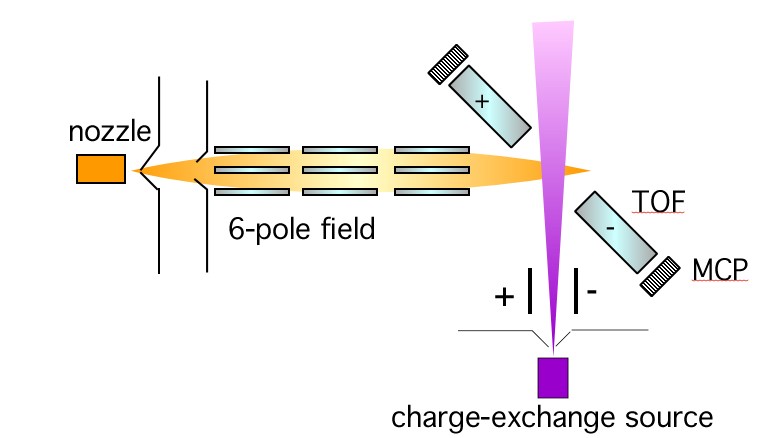 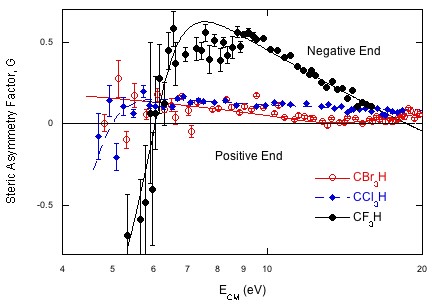