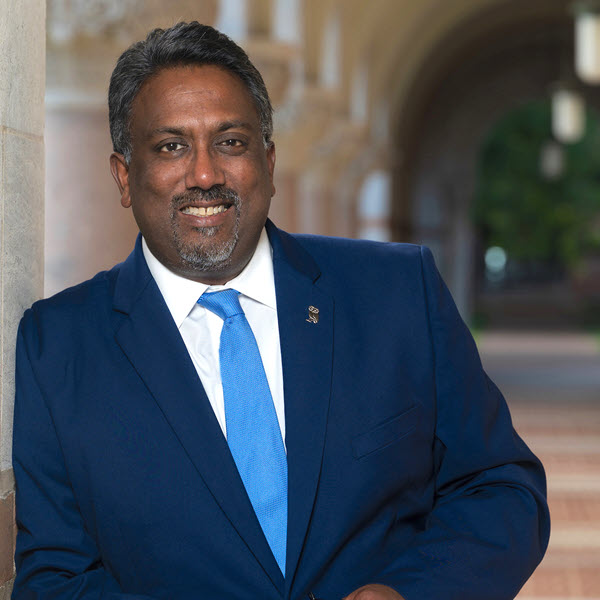 Dr. Paul Cherukuri is Rice University’s first vice president for innovation. As the chief innovation officer, Cherukuri leads Rice’s technology and commercialization infrastructure to translate breakthrough discoveries into inventions for societal benefit. The primary areas of focus for the Office of Innovation are technology translation, startup creation, commercialization and entrepreneurship training. The role also oversees Rice’s programs in and engagement with the Ion.

Cherukuri is a physicist, chemist and med-tech entrepreneur with over 15 years of experience in academia and the pharmaceutical industry. He earned his bachelor’s degree in physics from the University of Kentucky and his Ph.D. in physical chemistry under Nobel laureate Richard Smalley at Rice.

Before returning to Rice in 2014, Cherukuri was a visiting scholar with Harvard University chemistry Professor George Whitesides and a member of the Department of Experimental Therapeutics faculty at the University of Texas MD Anderson Cancer Center. He was also co-founder and chief technical officer of MAReNIR Technologies LLC and a senior scientist at Sanofi, where he developed drug products and biomedical devices.

Prior to being named vice president of innovation, Paul was executive director of the Institute of Biosciences and Bioengineering. During his six-year tenure in the role, Cherukuri engaged with faculty to develop interdisciplinary translational research partnerships with federal and corporate agencies, garnering nearly $37 million in funding aimed at accelerating the development of new technologies into commercializable products.

Intraluminal magneto sensor system and method of use, WO, US8212554B2