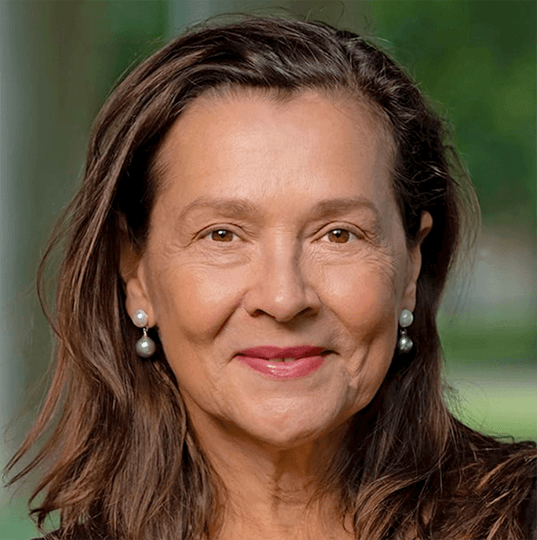 Naomi J. Halas is the Stanley C. Moore Professor of Electrical and Computer Engineering, with appointments in the Departments of Chemistry, Physics and Astronomy, Bioengineering, and Materials Science and Nanoengineering. She is the Founding Director of the Laboratory for Nanophotonics at Rice University and Director of the Smalley-Curl Institute. She received her Ph.D. in physics from Bryn Mawr College, pursuing her thesis research as a graduate fellow at IBM Yorktown. She then served as a postdoctoral researcher at AT&T Bell Laboratories, joining the Rice faculty in 1990.

Halas is best known for showing that the nanoscale internal and external morphology of noble metal nanoparticles controls their optical properties.  She was the first person to introduce structural control into the colloidal synthesis of coinage metal nanoparticles to control their optical resonances, which are due to their collective electron oscillations, known as plasmons.  Her work has been the force that merged chemical nanofabrication with optics, giving rise to the field of Plasmonics.  She pursues fundamental studies of coupled plasmonic systems as well as applications of plasmonics in biomedicine, optoelectronics, chemical sensing, photocatalysis, and solar water treatment. She is the author of more than 350 refereed publications, has more than fifteen issued patents, has presented more than 600 invited talks, and has been cited more than 98,000 times (over 70,000 citations and H=132 on Web of Science, over 98,000 citations and H=152 on Google Scholar). She is co-founder of Nanospectra Biosciences, a company offering ultralocalized photothermal ablation therapies for cancer based on her nanoparticles, currently in a multi-site clinical trial for prostate cancer.  She is also co-founder of Syzygy Plasmonics, developing a light-based chemical reactor for photocatalyst particles originally invented in her laboratory.

Optics and Photonics. Design and fabrication of optically responsive nanostructures, nanophotonics, plasmonics. Dr. Halas' mission is to create new nanoscale objects that perform a function; to understand the physical properties of those objects, both at the microscopic and macroscopic level; and to incorporate them into unique applications of societal and technological impact.

2009 American Academy of Arts and Sciences

2005 American Association for the Advancement of Science