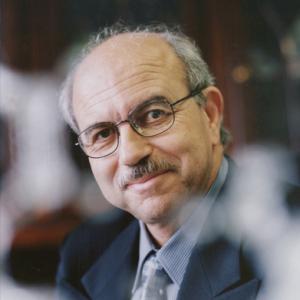 Nicolaou’s research focuses on the advancement of organic synthesis for its own sake and its application to the synthesis of natural and designed molecules of biological and medical importance. Past accomplishments include the total syntheses of the naturally occurring antibiotics amphotericin B, vancomycin and viridicatumtoxin and their analogues, the anticancer agents Taxol®, calicheamicin γ1I, and rapamycin and their analogues, the marine neurotoxins brevetoxins A and B and the azaspiracids, and large segments of maitotoxin, the largest secondary metabolite and most potent nonproteinoic neurotoxin known to date. His research has also led to the structural revisions of numerous natural products and the discovery and development of many synthetic strategies and technologies.

Current projects in the group include the total synthesis of highly potent and scarce naturally occurring cytotoxic molecules and their analogues as payloads for antibody-drug conjugates (ADCs) for targeted personalized cancer therapies. These include the rare natural products shishijimicins, trioxacarcins, tubulysins, thailanstatins, epothilones, uncialamycins, disorazoles and namenamicins.

K.C. Nicolaou was born on July 5, 1946 in Cyprus, where he attended school until the age of 18. In 1964, he emigrated from Cyprus to England where he spent two years learning English and preparing to enter the university. His advanced studies in chemistry were carried out at the University of London (B.Sc., 1969, Bedford College, First Class Honors; Ph.D. 1972, University College, with Profs. F. Sondheimer and P.J. Garratt). In 1972, he crossed the Atlantic to the United States and completed postdoctoral appointments at Columbia University (1972–1973, Prof. T.J. Katz) and Harvard University (1973–1976, Prof. E.J. Corey) after which he joined the faculty at the University of Pennsylvania, where he rose through the ranks to become the Rhodes-Thompson Professor of Chemistry. In 1989, he accepted joint appointments at the University of California, San Diego, where he was Distinguished Professor of Chemistry, and The Scripps Research Institute, where he served as the Chairman of the Department of Chemistry and held the Darlene Shiley Chair in Chemistry and the Aline W. and L. S. Skaggs Professorship of Chemical Biology (1996–2013) in the Department of Chemistry. From 2003 to 2009, he concurrently served as the Founder and Director of the Chemical Synthesis Laboratory at A*STAR, Biopolis in Singapore.  From 2012-2014, he was Visiting Professor at Chongqing University, China. In May 2013, Dr. Nicolaou joined Rice University as the Harry C. and Olga K. Wiess Professor of Chemistry in the BioScience Research Collaborative.