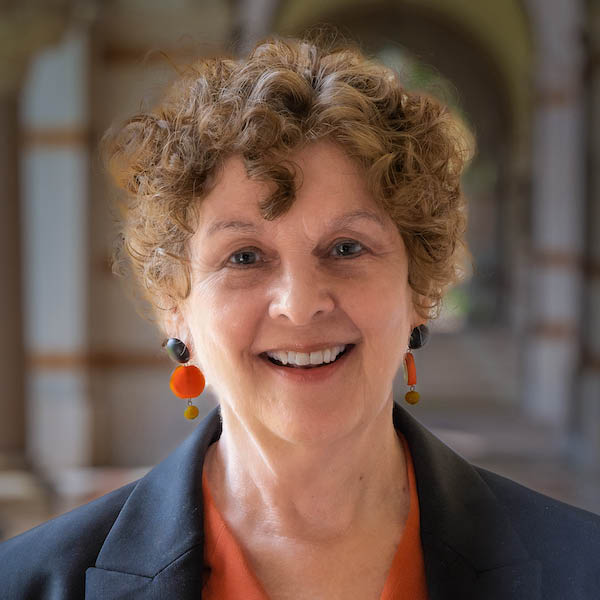 Kathleen Canning is the Andrew W. Mellon Professor of History and Dean of the School of Humanities. In this role, she provides leadership to a school with eight departments, 15 centers and programs, 160 faculty, and highly-ranked programs in disciplines such as English, history, philosophy, and visual and dramatic arts.

Since joining Rice as Dean of Humanities in January 2018, Canning has developed a strategic vision for a more fully integrated and “connective humanities” at Rice and led several initiatives to raise the visibility of the school and to deepen its connections to the other schools at Rice and to key institutions in Houston and the region. These include creating a facilitated acceptance program for Rice Humanities majors with the UT McGovern Medical School, which provides a pathway for medical school admission for up to eight students who apply in their junior year. Other initiatives include the founding of an interdisciplinary Center for African and African American Studies, a joint undertaking with the School of Social Sciences. Canning also launched the new Big Questions courses that invite students from outside the School of Humanities to experience how humanities inquiry can help students make sense of the world they inhabit and the daily dilemmas our society faces. She has also championed efforts on behalf of a new building that will provide a home for the student arts at Rice on the ground of legendary Rice Media Center and that will anchor the arts as a vital part of Rice Humanities and of a Rice liberal arts education.

Prior to her arrival at Rice, Canning held appointments in History, Women’s Studies, and German at the University of Michigan, where she also served until 2017 as chair of the Department of History, the nation’s largest history department and one that was consistently ranked in the top seven. Her major field of scholarly research is modern German and European history with an emphasis on the history of democracy and citizenship, gender and family, state, labor and social movements in the late 19th and 20th centuries. She has published widely on these topics and held several national and international research fellowships that supported her scholarly endeavors.

Canning has been an active and engaged teacher of undergraduate and graduate students: she was spotlighted in Newsweek’s College Guide as one of the nation’s “Four Great Professors” in 2009. At Michigan, she was named an Arthur F. Thurnau Professor for distinguished contributions to undergraduate education; she also won the Matthews Underclass Teaching Award for her innovative work in teaching first- and second-year undergraduates. For her contributions as a mentor and advisor of over 30 doctoral dissertations, she received the John D’Arms Award for Distinguished Graduate Mentoring in the Humanities.

One goal of the Humanities Dean’s Office under Canning is to make the Humanities more relevant and visible at Rice. She aims to invite students from all schools and disciplines at Rice to pursue the big questions we ask in our classrooms — on the who is at the center of the study of medicine; on ethics and morality in the face of disaster; on the place of law and politics in the future of democracy; on the digital arts that connect the arts and engineering. Dean Canning is an advocate for the arts and is thrilled to feature student art exhibits in the Dean’s conference room; she is a fan of the Rice Theatre productions and of the Shepherd School of Music’s wonderful orchestral performances.

Canning first studied abroad as a post-BA Fulbright scholar: she completed a Master’s degree at the Ruprecht-Karls University in Heidelberg, Germany before embarking on PhD study at the Johns Hopkins University. She has spent more than 10 years living, researching and teaching in Germany. Her family is bilingual and bicultural: her partner studied comparative German, French and Spanish literature; one of her children is in preparing for a career in public-interest law at Harvard Law School and the other graduated from music school and works in digital music production in New York City.

Bachelor of Arts, University of Oregon