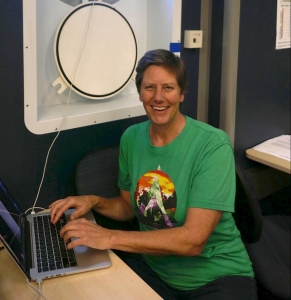 My research interests are focused on deformation processes near the surface of the Earth. In this regime, friction and fracture are the dominant deformation mechanisms, and the origin and evolution of shallow deformation structures are dominated by these processes. Additionally, the fractured nature, and the abundance of sediments and soils near the Earth's surface, means that the shallow crust can be approximated as a granular system (although sometimes cohesive), in which particles interact in relatively simple ways to create complex emergent structures. This allows us to apply the principles of soil and sediment mechanics to understand their behaviors.

A wide range of geologic structures capture my attention, and provide entertaining research targets. These include active submarine accretionary prisms, for example, the Nankai prism southeast of Japan and Cascadia prism offshore of Oregon. I have also worked in areas of continental rifting and extension, in particular, along the Iberian continental margin. and on low-angle detachment faults in the Basin and Range Province. A more recent interest of mine is the complex deformation histories and structures of volcanoes, which are subject to large-scale submarine landsliding and avalanching, as well as to more gradual creeping deformation. This deformation results from gravitational settling augmented by intrusive and explosive eruptive processes.

While my research is often driven by field observations (on-land and at sea), interpretations can be effectively tested through numerical simulations. One of the more interesting techniques that I use is the distinct element method (DEM) which simulates the discrete mechanics of particulate materials; the material is treated as an assemblage of discrete particles which interact with each other to produce the bulk behavior of the system. Such simulations are capable of capturing the complicated behavior of particulate materials, like sediments, which can deform as brittle solids or ductile materials depending on their physical properties, state of stress, and stress histories. Moreover, by following the movement of individual particles, DEM models can track the evolution of structures and deformation fabrics, and the distribution of material properties within the deforming system. This type of discrete simulation complements observation and experiment extremely well.