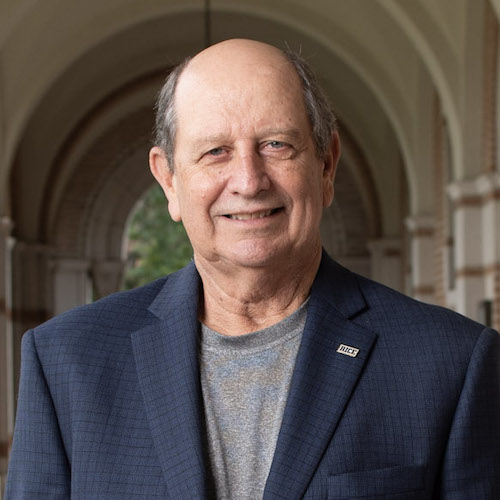 James G. "Jimmy" Disch is an Associate Professor in the Department of Sport Management with a specialization in sport analytics. He served as department chair for the Department of Kinesiology from 1995 until 2001. Dr. Disch earned his Bachelor of Science degree from the University of Houston where he majored in Health and Physical Education and minored in Mathematics. He continued his education at the University of Houston where he obtained his Master's of Education degree in Physical Education. Dr. Disch also earned his P.E.D. from Indiana University where he focused on Physical Education with an emphasis on Biomechanics. However, his main concentration in graduate school was measurement and evaluation, statistics, and research methods.

Dr. Disch began his professional career as an assistant professor at Rice University in 1973. He also served as an adjunct professor in the Educational Psychology Department and a visiting professor in Health and Physical Education at the University of Houston. He has published a number of articles, abstracts, and he is co-author of Measurement and Evaluation in Human Performance with Jim Morrow, Dale Mood, and Allen Jackson.

In 1999, Dr. Disch won the Honor Award from the Measurement and Evaluation Council of the American Alliance for Health, Physical Education, Recreation, and Dance (AAHPERD). He has held various offices in this association, as well as in the state and district levels. In 2011 he was named Sport Ethics Fellow of the Year by the Institute for International Sport and the Positive Coaching Alliance (PCA). That same year he also received an Honor Award from the Texas Association of Health, Physical Education, Recreation, and Dance (TAHPERD). In 2012, TAHPERD presented Dr. Disch with the Scholar of the Year Award. And in 2017 Dr. Disch received the David K. Brace Award, the highest honor that TAHPERD bestows.

In the community, Dr. Disch serves as a board member for the Positive Coaching Alliance Houston, and he is a local committee member for the Joe Niekro Foundation for Brain Aneurysm Research. He is also a member of the scientific advisory board for Exact Sports. He also works with Champions Kids Camp.

Dr. Disch has two children who are Rice graduates: Christina Disch Cahill who received her degree in 2007 in Health Sciences, and Scott Disch who received a MAT in physical education in 2008. He is the proud grandfather of Bradley, Weston and Lizzie Cahill and Scarlett Sophia and Blaire Lily Disch.

2012 TAHPERD Scholar of the Year Award