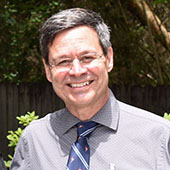 Prof. Darin Acosta received his B.S. in Physics from the California Institute of Technology in 1987 and his Ph.D. in Physics from the University of California, San Diego, in 1993. He was a postdoctoral researcher at The Ohio State University, and afterward became a faculty member in the Physics department at the University of Florida in 1997. He collaborated with and held an affiliate appointment with the department of Electrical and Computer Engineering at Florida. In the fall of 2021, he joined the faculty of the Physics and Astronomy department at Rice University, where he continues many of his previous research directions and is establishing new ones in collaboration with others in the department.

Prof. Acosta’s research program in experimental particle physics has spanned the Cornell Electron Storage Ring, the HERA electron-proton collider, the Tevatron proton-antiproton collider, and the LHC proton-proton and heavy ion collider. His research has focused on precise measurements of Standard Model processes (QCD and electroweak) as well as on searches for new particles beyond the Standard Model including leptoquarks and excited fermions. Most recently his research uncovered evidence for the rare Higgs boson decay into dimuons. Prof. Acosta is an expert on the trigger systems of particle collider experiments that perform a real-time analysis of high-rate collision data before storage to computer disk. He designed and successfully delivered the endcap muon trigger for the electronic trigger system of the CMS experiment at the LHC, and currently leads the overall CMS Trigger project.

In addition to research, Prof. Acosta enjoys conveying his enthusiasm for science in his teaching and in outreach activities such as the QuarkNet teacher program. He has taught a broad range of courses at the undergraduate level, from introductory physics to upper division labs and electives. He also pioneered the online physics course development at the University of Florida. You might spot Prof. Acosta running around the Rice loop, though at a speed much less than that of light and hopefully without any collisions!