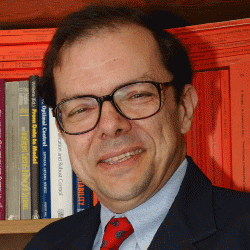 Since 1982 he has been with the Department of Electrical and Computer Engineering, Rice University, where he is currently a Professor. In 2016 he was named a Max Planck Fellow.

Professor Antoulas was elected Fellow of the IEEE (Institute of Electrical and Electronics Engineers) in 1991 and was awarded the Best Paper Prize of the AIAA (American Institute of Aeronautics and Astronautics) Guidance, Navigation and Control Section, in 1992. In 1995 he was awarded a JSPS (Japan Society for the Promotion of Science) Fellowship. He has served on the Editorial Board of many journals including the IEEE Transactions on Automatic Control, SIAM Journal on Control and Optimization, and Linear Algebra and its Applications. For the past 12 years, he has been serving as Editor-in-Chief of Systems and Control Letters.

He has held many visiting appointments, including those at the Australian National University, the University of Groningen, the Catholic University of Leuven and Louvain-la-Neuve, the Tokyo Institute of Technology, Kyoto University, etc. Furthermore he has given invited presentations at numerous conferences and workshops. His research interests are in the broad area of dynamical systems and computation including model reduction of large-scale systems. He is the author of a book on the Approximation of Large-Scale Systems, published by SIAM.