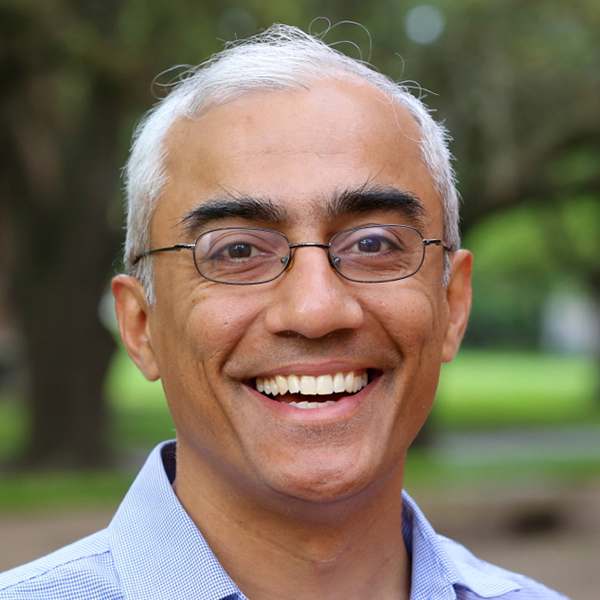 Professor Sabharwal is department chair for the ECE. Dr. Sabharwal received his B.Tech in 1993 from IIT - New Delhi, and his M.S. and Ph.D. degrees in Electrical Engineering from The Ohio State University in 1995 and 1999, respectively.

He currently works in two research areas. His first area of research is wireless, where his research spans fundamental theory and experimental systems.  He is the founder of WARP project (warp.rice.edu), an open-source project which is now in use at more than 125 research groups worldwide, and have been used by more than 500 research articles. He is currently leading RENEW (renew-wireless.org), an NSF PAWR project, that is developing world’s first  open-source massive MIMO platform for a deployed city-scale national wireless testbed. He is also leading the wireless  networks thrust in the ARL-Rice Center for advanced materials and networks.

His second area of research focuses on health, at the intersection of engineering, behavioral sciences and medicine, and established Scalable Health Labs (sh.rice.edu). Scalable Health Labs’ mission to develop methods to uncover behavior-biology causal pathways, with a specific focus in three areas: bio-behavioral sensing, mobile bio-imaging, and data science methodologies. Sabharwal is leading several NSF-funded center-scale proposals; most notably, he is the PI of “See below the skin” (seebelowtheskin.org) for non-invasive bio-imaging multi-university effort, and co-investigator on NSF Engineering Research Center, PATHS-UP (pathsup.org) that is developing cost-effective personalized technologies for under-served populations.

His research has led to four commercial spinoffs (one in wireless and three in healthcare). He was the past chair of the ECE Corporate Affiliates program as well as past director of the Center for Multimedia Communication (CMC). His research is supported by National Science Foundation (NSF), Army Research Labs (ARL), National Institutes of Health (NIH), Qualcomm, Intel, Texas Instruments, and Facebook.

2020 Fellow of National Academy of Inventors